The State Fair of Texas is here! I’m always excited to go to the Fair but this year I was a little apprehensive because it would be my first time attending with the kids. The last time I went to the State Fair I went on a weekend, rode a couple of roller coaster rides, ate almost every fried food there was and played games until the place closed down.

This year, not so much. Here is a list of Do’s & Don’ts for taking your young kids to the State Fair of Texas, based on my experience last week. 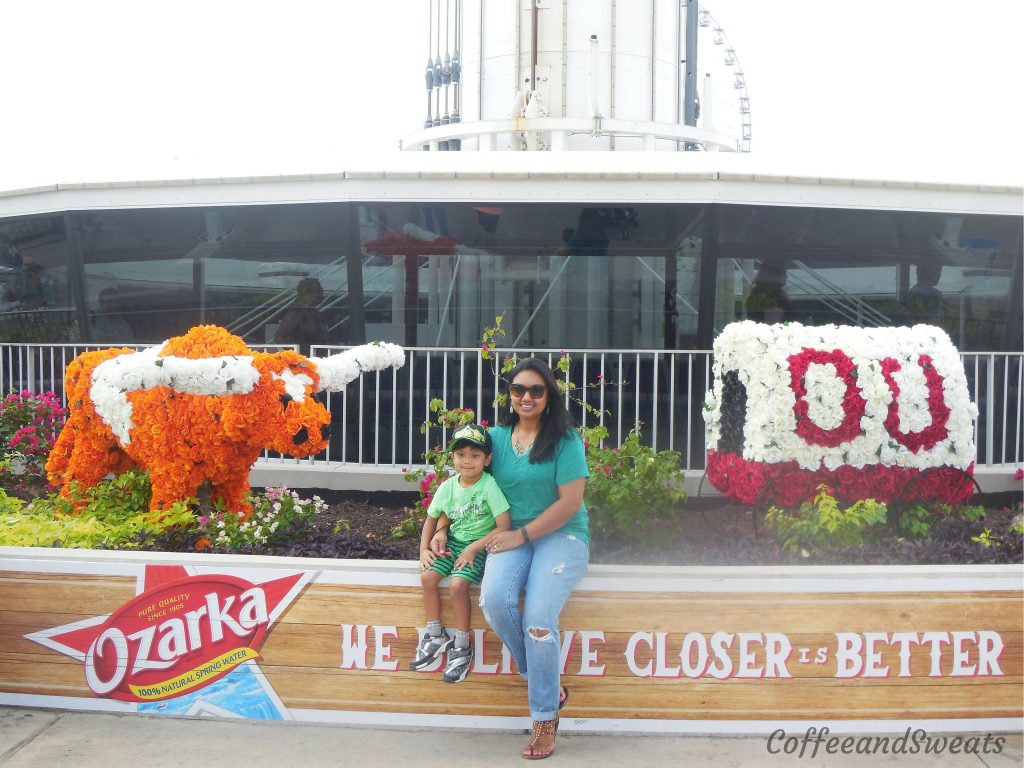 I’m shielding him from OU

Do: Go during the weekdays to avoid the crowds. Thursday afternoon was perfect for us. No lines anywhere and plenty of room to walk with a stroller.  We did notice a lot more people started coming in later in the afternoon when it was cooler and most kids were getting out of school.

Don’t: Go during the hottest part of the day. We reached there around 1 pm and even though we were armed with sunscreen, hats and sunglasses, it was still a sunny 91F outside. Kids (and adults) don’t last very long outside in the heat.

Do: Check out the daily discounts for admission. For example, you could bring in an empty Dr. Pepper can on Tuesdays and get in for $5. Kids under 3 are free and most school districts provide school children with a free ticket. Use it!  There are also senior discounts and lots of retailers sell advance purchase discounts. Spend your money for all the fun inside the fair not for admission.

Don’t: Eat a lot of fried food within five minutes of walking into the Fair. Thanks to Rambo’s amazing self control we bought the first fried food we saw – a cookies and cream funnel cake. It was delicious, entirely too big and it filled us up, so we didn’t feel like eating anything else for a long time. And really, funnel cake? You can eat those anywhere. Save room in your belly for the Big Tex Choice Awards. 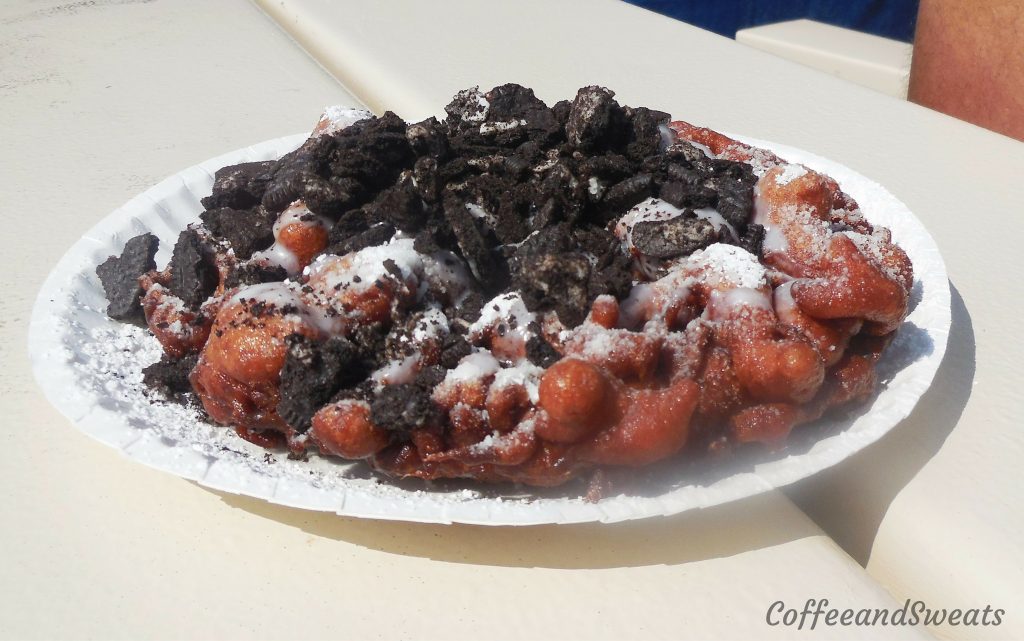 Do: Eat at least one thing that won an award this year! Eating Fair Food is what the Texas State Fair is all about. This year, Fernie’s Holy Moly Carrot Cake Roly won for Best Tasting and I can’t describe how good it was. Here is an excerpt from the State Fair website to give you an idea.

“Golden-baked bread swirled with cinnamon has been flattened and filled with moist carrot cake, plump raisins and crunchy julienned carrots. Rolled with a light coating of cream cheese and then breaded in a mixture of panko, graham crackers, cinnamon and nutmeg – holy moly this is far from your typical dessert! Drizzled with cream cheese frosting and lightly dusted with powdered sugar, this divine confection is served with extra caramel on the side as well as a caramel macchiato cream sauce.” 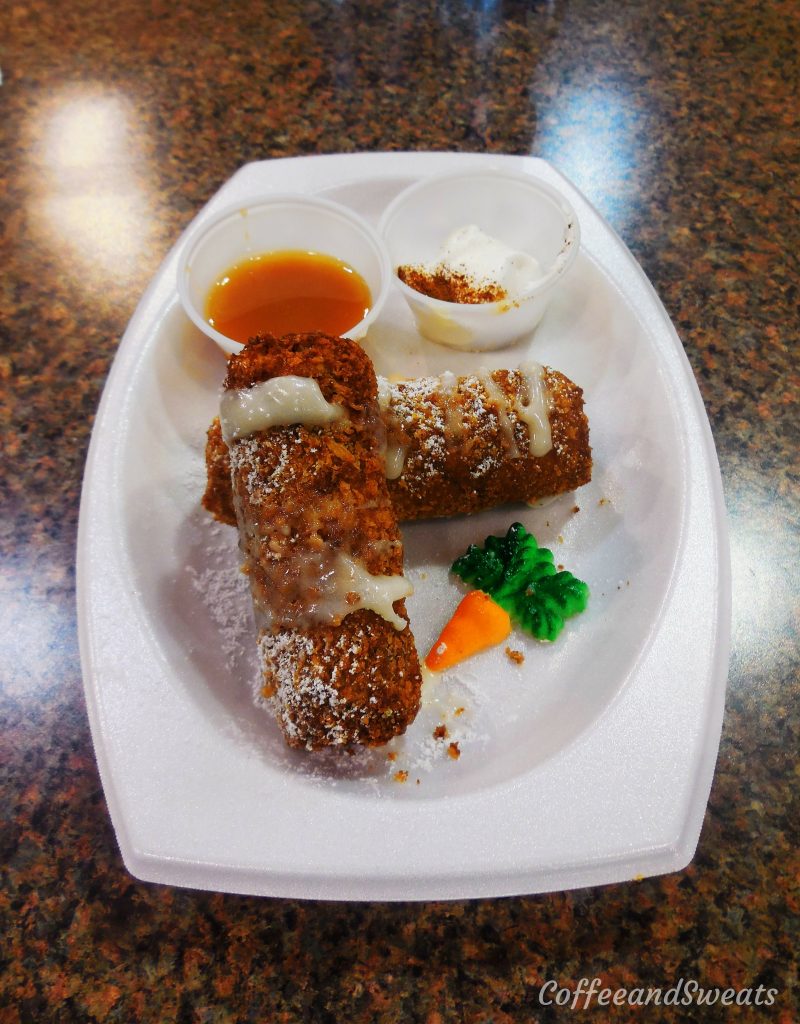 I have no words

Do: Bring a stroller. We brought along our Baby Jogger stroller with the Glider board for the preschooler to ride on when his legs were tired. I got stopped several times by people telling me how awesome the glider board attachment was. Strollers can also be rented out and you can bring in your own wagons too. Little legs can’t walk so far and the Fairgrounds are big.

Don’t:  Try to do everything. There are over 100 performances daily at the Fair. Between the Auto show, live music, animal stunts, rides, games, food, cook-offs & shopping there is no way you can do it all in one day. Pick and choose what your family will enjoy the most and hit those up.

Do: Expect to spend a lot of time at the Kidway area of the Midway. That’s where the little kid rides and scaled down games are. Nice thing is that every kid wins a prize. So the preschooler thought he was awesome and ‘really, really good’ at shooting water at a target. 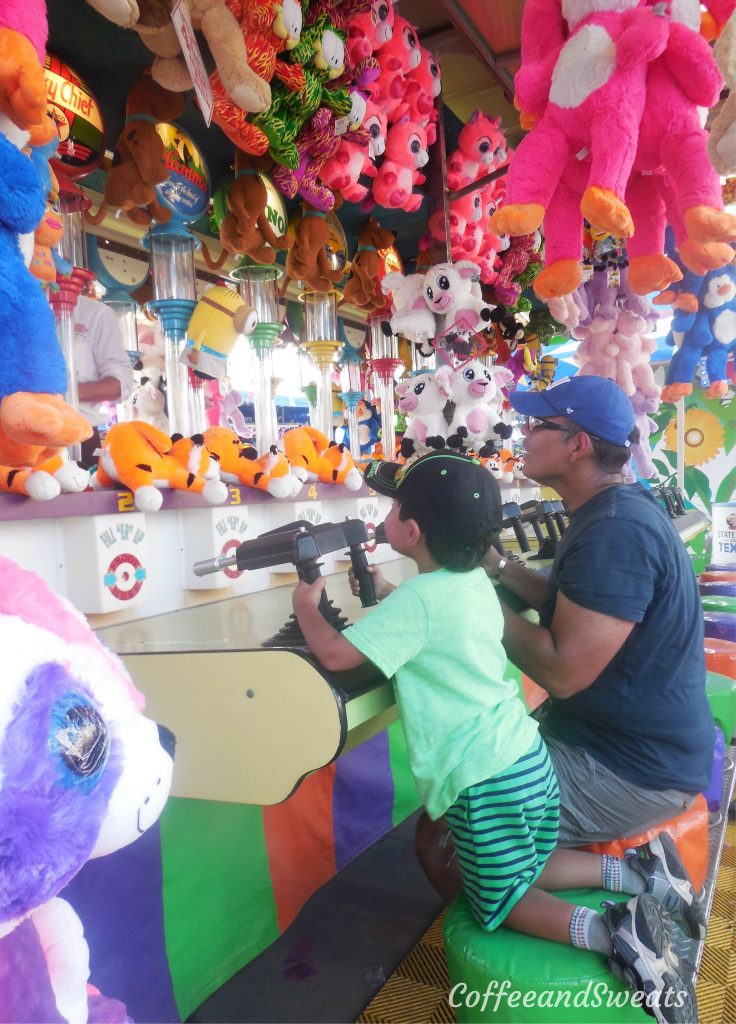 I lost count how many times they played this one game.

Don’t: Forget to buy a Big Tex Game card if you want to play games at the Midway. It costs $10 for 20 credits. Most games were 10 credits so about $5/game. Those 50 cent coupons are only good for food and rides.

Do: Check out the Children’s Health Barnyard where you can feed farm animals and other not so farm animals. Like Camels and Zebu’s. Be sure to secure your overly excited toddler from trying to open the gates and going inside the animal pen.

Don’t: Feed the Giraffe. They drool. I saw a lady with her hands cupped full of Giraffe drool and I nearly threw up. Barnyard smells – all good. Giraffe drool? Vom.

Do: Check out Little Hands on the Farm. It was adorable. The kids got a hands on experience of how farmers grow food. They got to feed chickens, collect eggs, plant seeds, harvest crops and drive a miniature tractor. Super cute. Fun enough to change the preschooler’s future vocation from Ninja to Farmer. 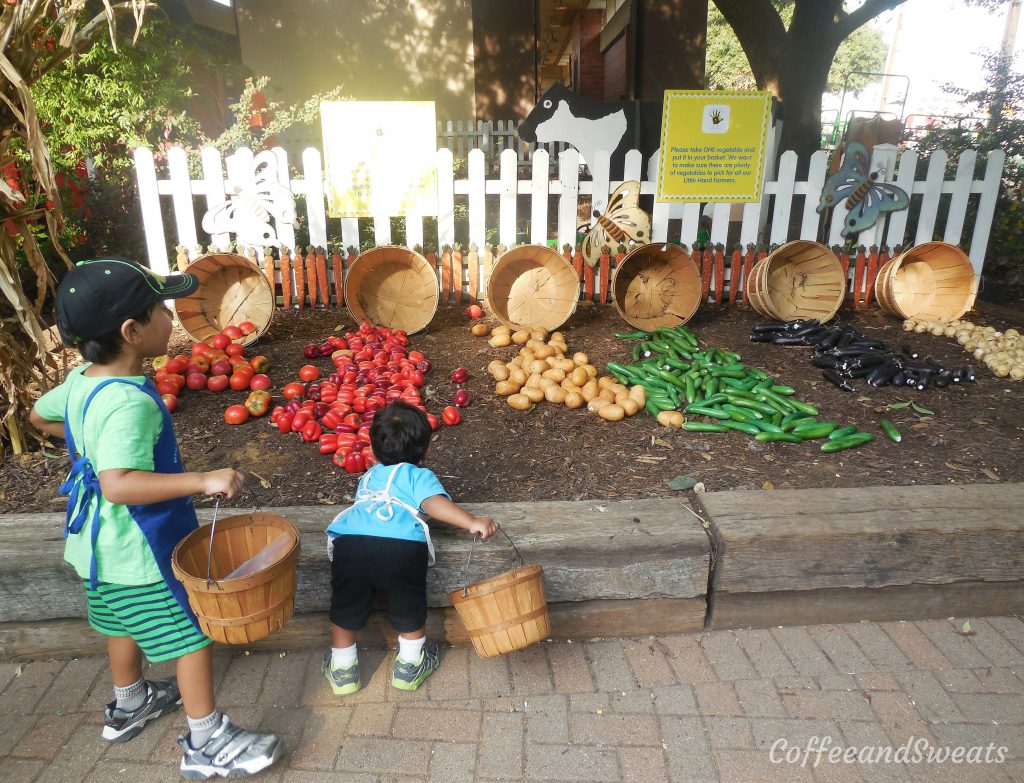 Do: Take a ride on the Top o’ Texas Tower. It’s that giant thing I’m sitting in front of in the first picture. It very slowly goes 500 feet into the air and again, very slowly rotates all around so you get magnificent views of Dallas and surrounding areas. The kids loved it. It was one of the few rides we could all go on together so I loved it too. 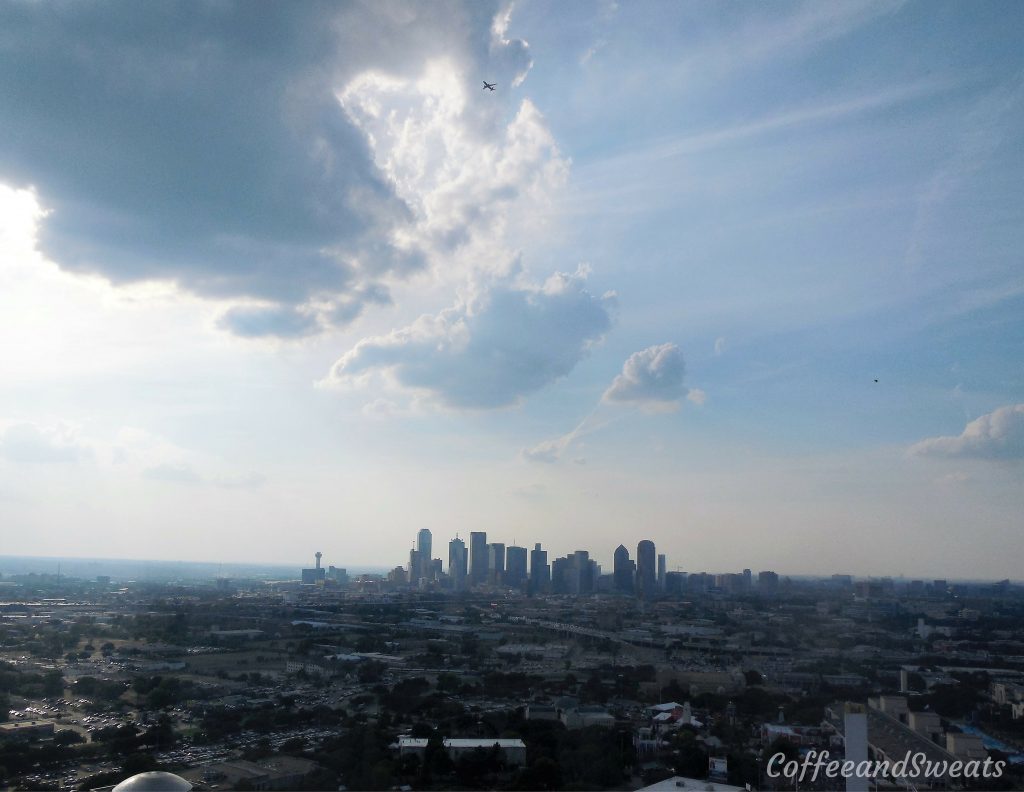 Maybe next year I will be able to take a picture of the Cotton Bowl Stadium filled with people? But then I’d have to go to the Fair on Game day and it will be insane. Maybe not then. 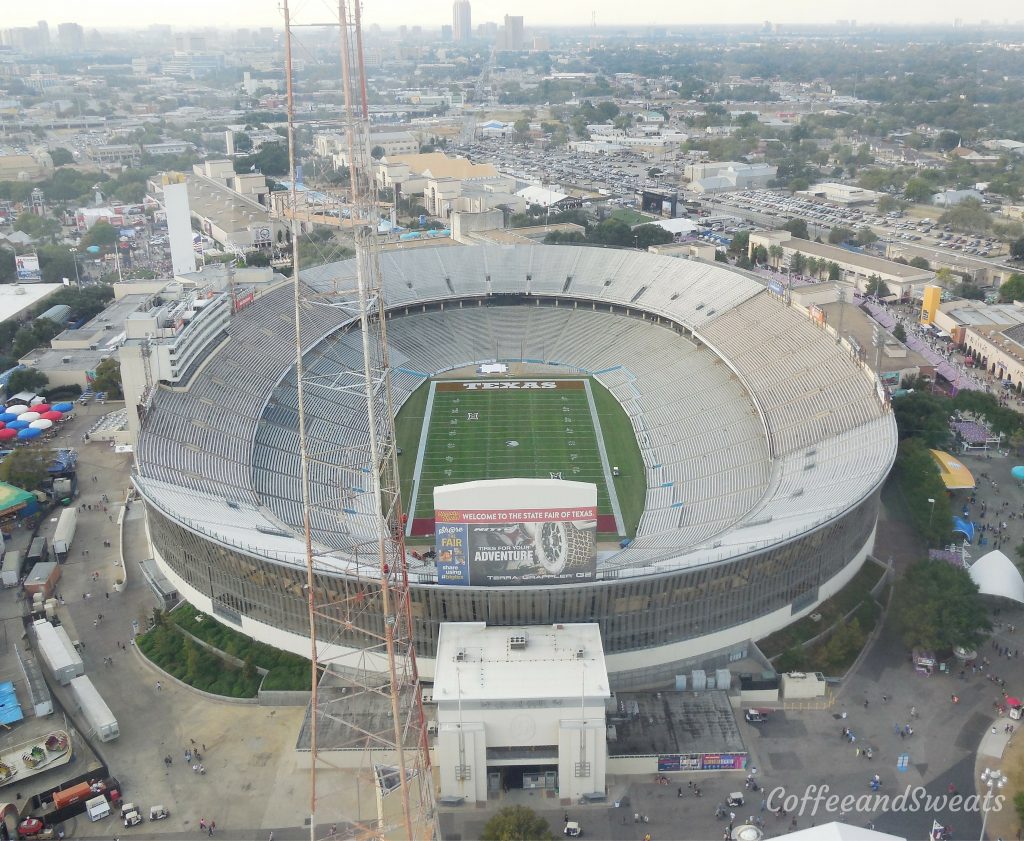 So it was a very different experience this year but still a lot of fun. I wish I could have seen the Starlight Parade that comes on at 7:15 pm but there was no way the kids would have lasted that long. They were nice and exhausted from a full day of fun.  I think I will get a season’s pass for next year because they keep asking me when we’re going to go back to the Fair!

Have you been to the State Fair with young kids? Any must-see attractions that I missed?