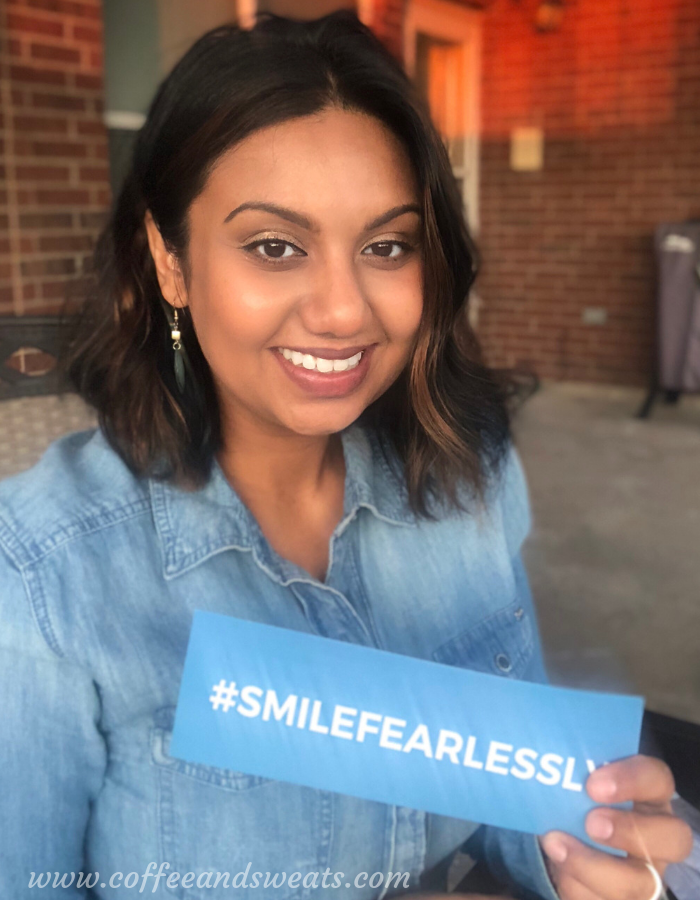 Disclosure – I received a complimentary kit from Smile Brilliant to facilitate this review. All opinions expressed are my own.

I noticed that my teeth are not as bright in pictures as they used to be. I begin to pay attention to the commercials, the magazine ads and all the many different ways to whiten your teeth.
Do they hurt? Are they expensive? Should I jump on this too? Yellowed teeth make you look older than you are and my diet is definitely not helping my smile.

But I was scared – I have heard of people trying whitening treatments and complaining of nerve pain or sudden teeth sensitivity and was the money even worth it? I want that celebrity smile but I don’t have that celebrity cash!

So when Smile Brilliant reached out to me to try their at home whitening kit I was curious and excited to do it!

How do you whiten your teeth with Smile Brilliant?

It’s super simple and easy. You create an impression of your teeth. You send the impressions off in a pre-paid envelope. Less than a week later Smile Brilliant will send you a customized tray that fits perfectly on your teeth.

Smile Brilliant provides instructions on how to create the impressions. Basically, you have some soft putty that you squish and play with. Then you spread it over the little blue tray that is provided and sink your teeth into the putty. A few minutes later, impressions made.

I mailed them off in the prepaid envelope and in less than a week I was holding my custom made whitening trays that came in their own storage box. It was really simple.

The kit comes complete with whitening gel, desensitizing gel and instructions for the whole process. Squeeze some gel into the trays and fit the trays over your teeth. Then you hang out for some time. Anywhere between 45 minutes to 3 hours.

Yes, you can still talk with the whitening trays in your mouth without drooling everywhere! It’s barely noticeable, to be honest. I wouldn’t recommend going out and wearing them in public but at home, I had no issues carrying on a conversation with them on. Oh.. yes one more thing. Try not to sneeze with the trays in! Maybe I’m just a violent sneezer but those trays came flying out of my mouth and it was hilarious!

What are the Cons?

Yes, there were some cons. I started noticing a stinging sensation on my gums after the first few times I whitened my teeth. I called up Smile Brilliant for some advice because I didn’t think that was normal. They advised me to use less whitening gel in the trays so the gel wouldn’t reach up to my gums. I tried that along with some oil (I used coconut oil) rubbed on my gums to prevent the whitening gel from touching my gums. Great advice because it worked! I no longer had any issues with gum sensitivity.

They also advised I cut down on the coffee while I’m doing this whitening process on my teeth. Makes sense. Drinking coffee while whitening your teeth is like running on the treadmill and eating a donut at the same time. One thing is destroying the results of the other. So I also cut down on coffee drinking which isn’t really a Con but I’m addicted to coffee so it wasn’t easy!

I definitely noticed my teeth getting whiter and brighter. My friends noticed my smile and none of my friends knew that I was whitening my teeth. I got some compliments like “Your teeth look really great – I don’t know why I’m just now noticing them” and “You have a really nice smile” – these from people I have known for years!

Yup yup. It was my Smile Brilliant smile that’s what! When I admitted I had been whitening my teeth they realized that was it! My smile looked brighter.

Unfortunately as excited as I was to capture the results on camera I was disappointed that I didn’t see a difference in photos! Same DSLR camera, same lighting and no editing whatsoever. To me, my teeth look the same in the before and after shots. Tell me what you think?

Possible reasons why I didn’t see dramatic results on camera:

I tried letting the coffee cool and drinking it through a straw so it would have less contact with my teeth. I did that maybe twice because I would keep forgetting.

Overall I’m extremely happy with my results. I’m sorry I couldn’t depict that in a photograph – you’re just going to have to see it in person or try it out yourself.

Want to try it out?

Go to Smile Brilliant and use coupon code: coffeeandsweats20 for 20% off! Or you could….

Enter to win a $149 credit at Smile Brilliant! Check out their T3 Sensitive System complete with 1 set of custom trays, 9 whitening applications and 9 desensitizing applications. All you need to do to enter is provide your name and email address. Contest open to all readers in United States of America, Canada, United Kingdom and Australia. Giveaway expires exactly one week from today on September 21st 2018. Go enter! It’s time to #SmileFearlessly 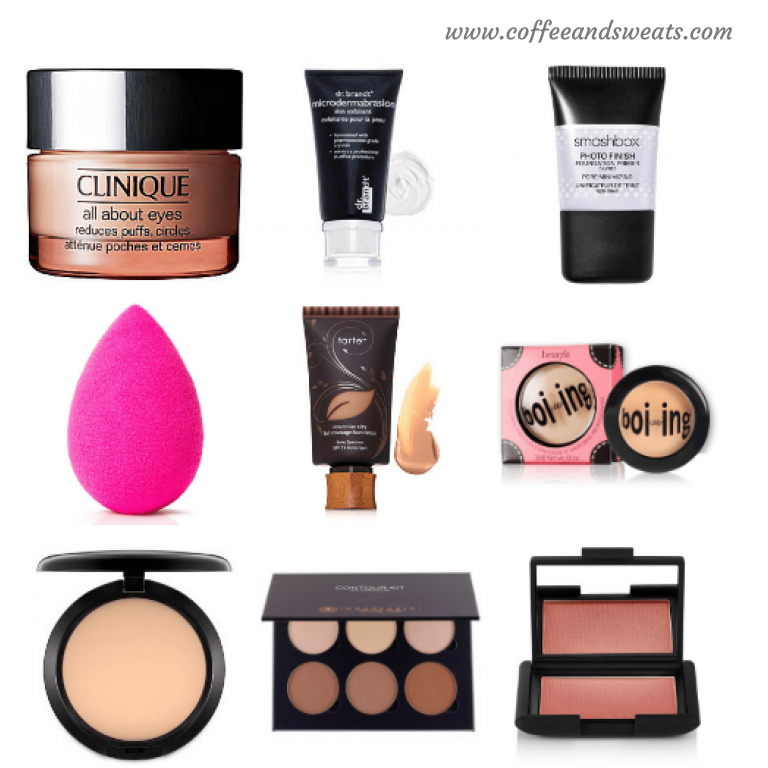 I was fourteen when I discovered concealer. I’ve always had dark circles under my eyes and drama queen skin. Concealer was the magic that hid them like they never even existed. Even now if I’m feeling crappy, I will put on some makeup to feel good about myself and conquer the day.  Below I’ve listed the beauty products that I use consistently. If it runs out, I go out and immediately buy another. You can shop them by clicking on the product itself (affiliate link of course). I’ve selected my top five and explain why I can’t live without them.

1. NARS lipstick – Fire Down Below

It’s been said that Francois Nars took two years to develop this color which is supposed to be the closest shade to human blood. Which is what makes it a universally appealing shade of red on every skin tone. I love a dramatic red lipstick but had issues finding one that’s not too bright but not too vampy. This shade is perfect. It also feels great on your lips.

Look I can’t do fake lashes ok? I wear contacts. I have allergy eyes. I’m also uncoordinated AF and can’t glue shit that close to my eyeballs. I just can’t. I need a mascara that can put in work. I keep coming back to this one. Maybe it’s the brush. Maybe it’s the formulation I honestly can’t pin point why I love Bad Gal lash so much but it makes my eyes look awake and I love it.

What concealer did for my face, BioSilk did for my hair. This stuff is magic. I have naturally straight hair, prone to frizz and fly-aways. Smooth some of this onto damp hair before blow drying or a little onto dry hair and your hair will be the sexiest you have ever seen or felt it. Added bonus: It smells like heaven.

The first time I saw this pink tear drop thing in its cylindrical packaging at the store I had no idea what it was. When I realized it was a freaking sponge I rolled my eyes and moved along. Until every beauty blogger on the planet started raving about it, that is. I eventually gave in to curiosity and purchased it to see what all the hype was about. This little squish is like photoshop for your face. I’ve used brushes and even my fingers to smooth on makeup, but not until I dabbed it on with the beauty blender did I realize what makeup is really capable of doing. Your makeup will be blended into your skin and your face will look like you’ve got 3 Instagram filters on it – but in real life.

Bengali girls know eyeliner. We’ve been rocking that liquid-liner-cat-eye-winged look since we were in middle school. Trust me when I say I have a serious list of requirements for eyeliner. It needs to be the blackest black. Make that a matte blackest black. Also if it’s a pencil liner, it needs to glide on smoothly and not smudge. Got it? Tarte got it right with this double ended liner. Both the pencil liner and the liquid liner end gets this Bengali girl’s approval.

Have you already tried any of the above beauty recommendations? I’d love to hear your opinion. If not, try some out and let me know what you think!